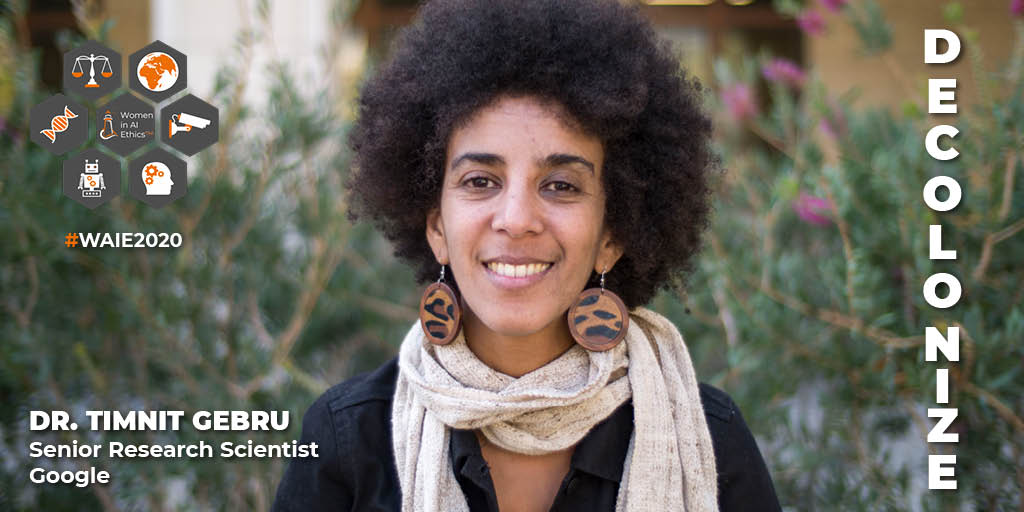 “How are you doing?”

Dr. Timnit Gebru’s fireside chat with Lighthouse3 CEO Mia Shah-Dand began with this personal check-in that’s increasingly necessary during such troubled times. This present moment in our history is full of struggles for all of us, and although she was quick to point out that others have it far worse than she does, it is admittedly fraught for Dr. Gebru, who’s fighting battles on multiple fronts — from her important and challenging work at Google as the co-lead of the Ethical AI Team, to the psychological toll of bearing witness to one more in an as-yet-unending stream of incidents of police brutality against Black people, to the additional emotional labor required in her daily interactions having to navigate white fragility.

She revisited this idea later in the talk, acknowledging that white fragility is very painful to deal with in this moment and describing a very recent interaction with a professional colleague, a white woman who called her sexist and racist. Dr. Gebru reflected on her evolving concept of allyship and how she no longer believes in allies, only acts of allyship, which she later credited on Twitter to her Black in AI co-founder, Rediet Abebe. Later in the talk, Dr. Gebru said that the most important aspect of allyship to her right now is self-reflection and a lack of defensiveness.

The candid conversation unfolded with a refreshing honesty and openness about the struggles and messiness involved in bringing groundbreaking projects to life, the tenacity and perseverance required for an idea to truly break through, and how much she learned from her co-author on the Gender Shades project, Joy Buolamwini, about the necessity of unrelentingly dedicating yourself to an idea or a project that you believe in. She described how Joy was so focused on the impact of this single idea that she was not really concerned with the research paper itself. She made a website with visualizations. She testified before congress. She created art exhibitions around it. She performed spoken word about it. “When you want to make an impact, that’s how you do it.”

Dr. Gebru also reflected on her early experiences with discrimination as an immigrant to the United States at age sixteen as an Ethiopian of Eritrean descent, and how being an immigrant was actually instrumental in her ability to keep a positive sense of self-worth in the face of the discrimination and racism that she encountered in the U.S., drawing on her formative years in Africa that had already instilled within her a strong self-conception. She encouraged the audience about the importance of believing in yourself and the challenge of processing the feedback you get when others tell you “no” or don’t believe in you.

Most importantly, she reminded the audience how important it is for all of us to support each other: be happy when someone receives recognition, and show support when someone is being targeted.

She closed the session with words of encouragement. “Let’s take it easy. Let’s take care of ourselves. Take the night off. Turn the laptop off. Don’t have the world’s problems on your shoulders.”

Author: Rebekah Tweed is a writer and communicator exploring artificial intelligence within the music industry. Passionate about AI ethics and responsible innovation that respects human rights and prioritizes well-being. https://www.linkedin.com/in/rebekah-tweed-b52280183/

AI Ethics Weekly - August 31: The System is Not Broken. It Was Built This Way.